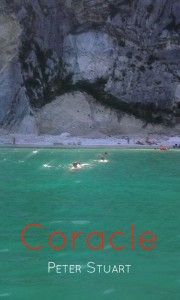 Cocooned, we slide
into a newly elongated world
a wet horizon encircling us

A coracle is a small boat of wickerwork but in the poems of Anglican priest Peter Stuart it becomes the ribs of a dying man, and the means by which another makes his way into the next life, having kept vigil at ‘eternity’s rim’.

A coracle is also a kayak taking Peter and his wife, Julia, into Ōkarito Lagoon and the beauty of the natural world which – on the wings of the kōtuku – carries the reader eventually to the white robes of the monks at Kōpua, and further to the white invasion of an aboriginal sacred site and a barbecue at Auschwitz with a bunch of money changers.

For these poems are angry, too, and political, and take delight in the joyous and sensual. A singular first collection that poses as many questions as it answers.

Peter Stuart is an Anglican priest who lives in Eastbourne, New Zealand.

“Stuart’s first collection is a rich and musical inquisition of faith. Coracle may be a small boat, but its cargo is plentiful.” — National Poetry Day NZ Blog
Read the full review