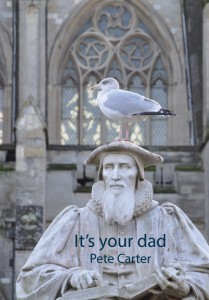 Most of these poems and prose pieces were written in and around 2011. It was a year for me that was pretty miserable; I returned from New Zealand to the UK three times. The first was to see my parents, who were clearly on the way out. Mum, who had always been a talker, couldn’t speak following a stroke; Dad was confined to bed. They died exactly two months apart, Mum first. My brother Tim joked that if I was lucky I’d get a ‘twofer’, but their timing was out.

I started the year with my arm in a sling after shoulder surgery, and turned fifty in May, which irrationally I hated. I found writing to be a good way to work things through. As you either know or will soon read, I write what I see and feel. I don’t like poems that I don’t understand, and you won’t find any riddles in mine.

Pete Carter was born in Newton Abbot, England, in 1961, and emigrated to New Zealand in 1997. He is married to Jac and has two grown-up children.

Writing poetry, memoir and travel pieces for the past five years, Pete has had articles published in the New Zealand Listener and Home magazine, and two poems anthologised in Eastbourne (Mākaro Press 2013). He says most of his output remains justifiably unpublished, and includes a novel. He submits himself to the ritual humiliation of entering writing competitions and has been shortlisted once.

Pete’s photographs have appeared in several publications and are in corporate collections. He has had one solo exhibition and participated in group shows in New Zealand and the United States. Pete walks, reads, runs a small business, plays tennis and squash and, when he’s not procrastinating, writes. He intends to rewrite the novel and complete other writing projects.

This is his first book.