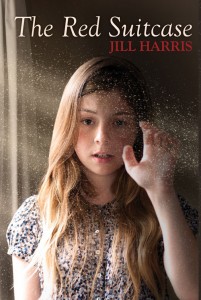 A terrorist bomb has forced Ruth’s family to leave Indonesia and return to Takapuna Beach, Auckland, where she desperately tries to establish a life at her new school. But instead she finds herself inexplicably sharing the exploits of a mysterious airman who went missing during World War II.

The only person who makes any sense of what’s happening to Ruth is physics geek Thomas Barnard – he knows something about the slippery nature of time. Help also comes from Ruth’s old friend Sally, who has a mysterious problem of her own. The Red Suitcase is an exciting story about a war that won’t go away, the uncertainties of peace and the need for friends to make sense of both. This is the fourth novel by award-winning writer, Jill Harris.

Author Jill Harris is the author of: Sil (Longacre Press, 2005), which won an Honour Award in the 2006 New Zealand Post Children’s Book Awards and was listed as a 2006 Storylines NZ Notable Book; Missing Toby (Longacre Press, 2007); and At the Lake (HarperCollins, 2011), a 2012 Storylines NZ Notable Book. Jill grew up in Takapuna, North Shore, New Zealand, spending a lot of her childhood swimming, boating, fishing and reading. She worked as a teacher and a librarian including three years teaching English in central Java, retiring to write children’s fiction, poetry and liturgies. She has two adult sons and four grandchildren, and lives with her husband in Eastbourne, Wellington. Jill’s books grow out of a commitment to the power of stories, music and the natural world. She thinks that a novel for children and young adults should be a rattling good yarn.

“For a short novel, The Red Suitcase deals with a wide range of modern topics that teenagers will  identify with: from Ruth adapting to the new school, the confusion and pleasure of reuniting with a childhood friend (then finding out that she has some uncomfortable family secrets too), the joys of fitting in.” — Angela Oliver, Booksellers NZ Blog
Read the full review.

“There is a sting in the tail of this neatly structured novel for high school students.” — Bob Docherty, Bobs Books Blog
Read the full review.